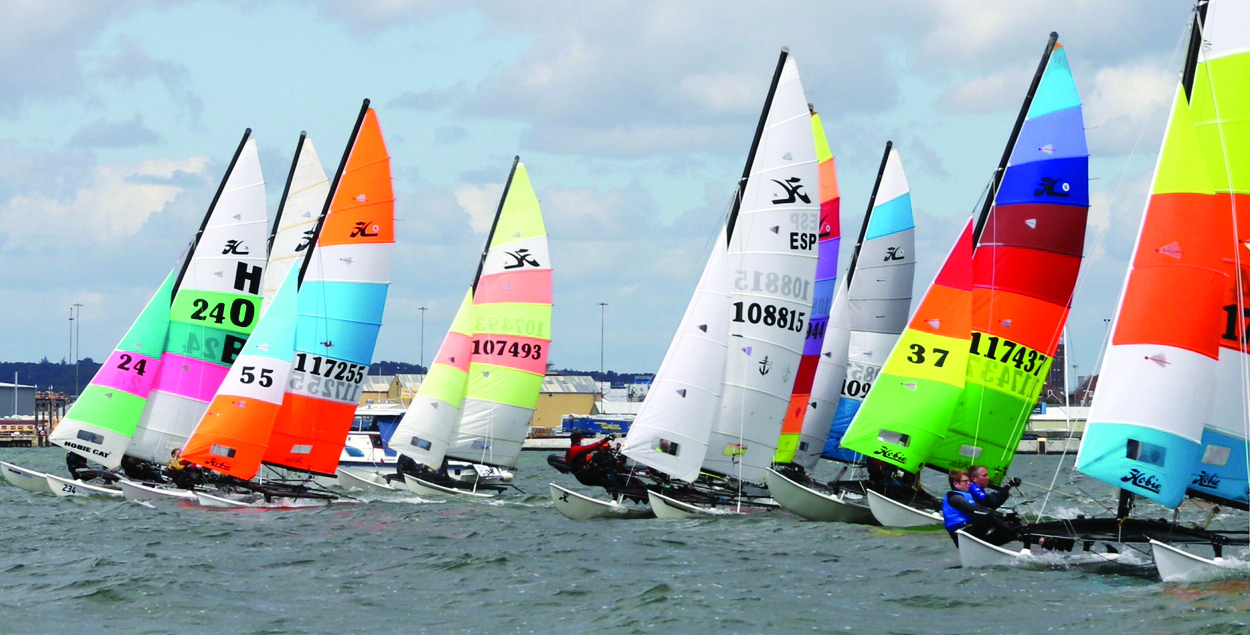 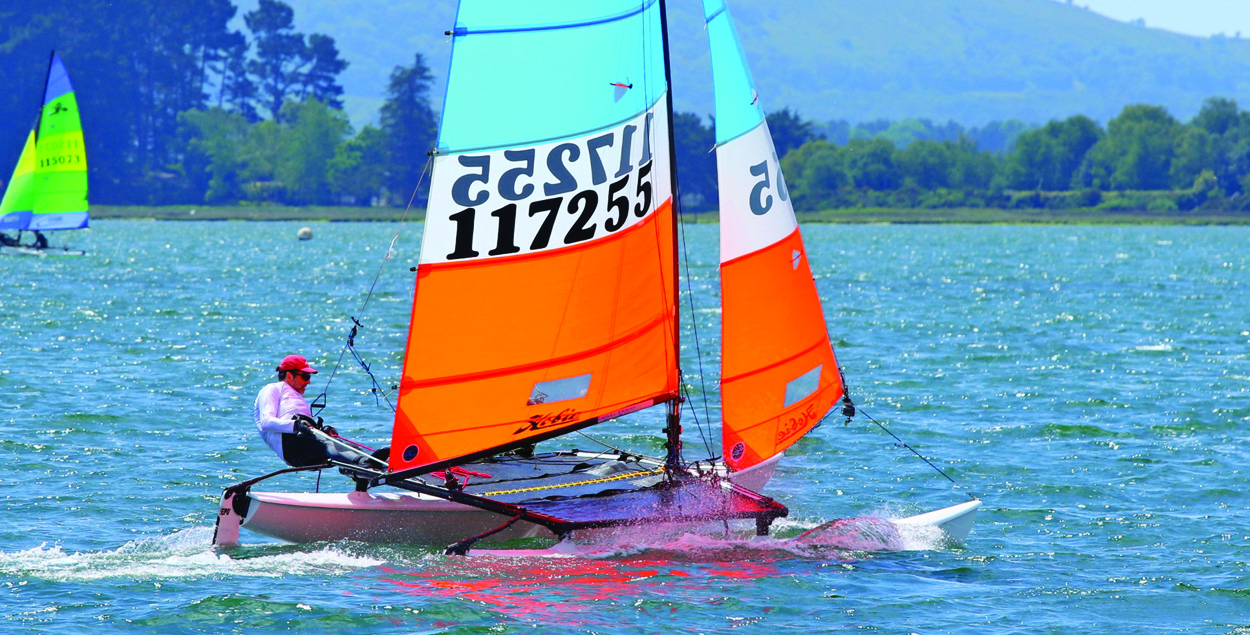 Ask about training on Hobie Cats 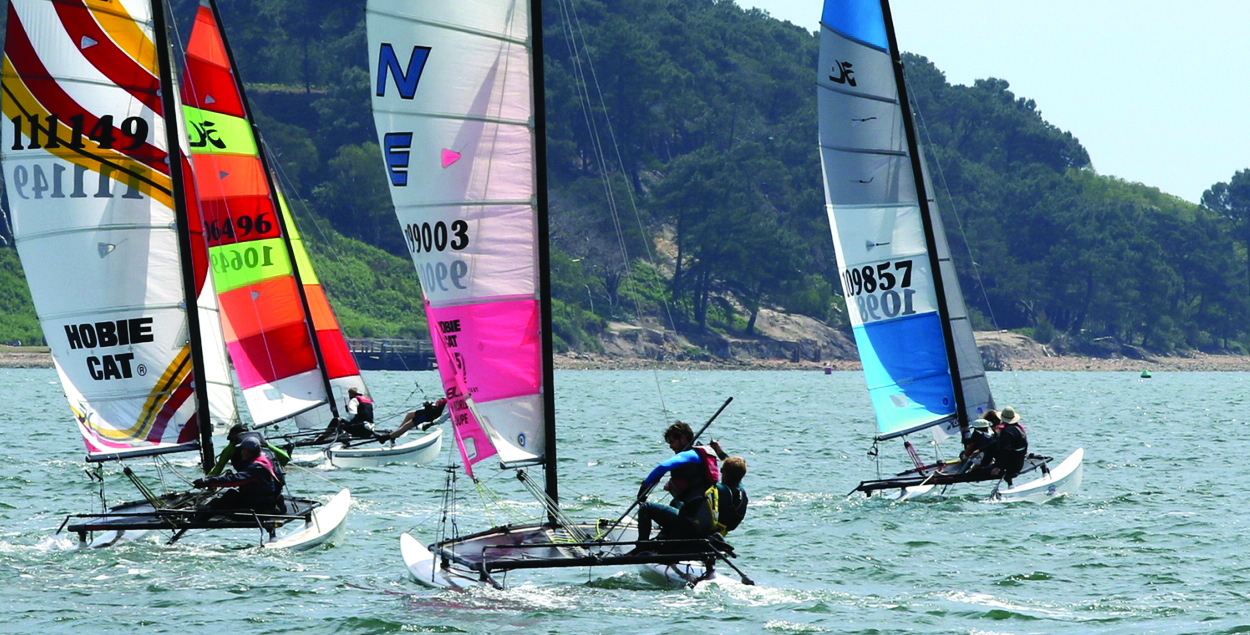 Join us this August at Poole Yacht Club

Click on the buttons below to explore the Hobie Class Racing page.

As soon as this year’s fantastic Hobie Nationals were over the BHCCA committee were keen to set the date for next year’s event. After discussions at the AGM, it was concluded that that all the sailors were keen to return to Poole Yacht Club for another year. Poole Yacht Club is perfectly suited to Hobie Sailing events thanks to a combination of the perfect launching spot on the beach and the fact that there is plenty of space for some great competitive sailing in the ‘top triangle’ – Balls Lake inside the relatively sheltered Poole Harbour. The club also has great facilities for socialising and spectating.

As soon as the committee spotted that the specially extended bank holiday weekend coincided with great tides, they were straight down to the office with the booking form and after discussions at the meeting on Monday the Poole Yacht Club committee were keen to welcome back the Hobie Sailing fleet.

There will be 3 days of racing which count towards the Nationals and the additional day (probably the Thursday) will be either a training day, a fun day or a long-distance race, the details are yet to be decided by the committee. If you have any ideas about how we should run the additional day, please get in touch, or join the BHCCA committee. 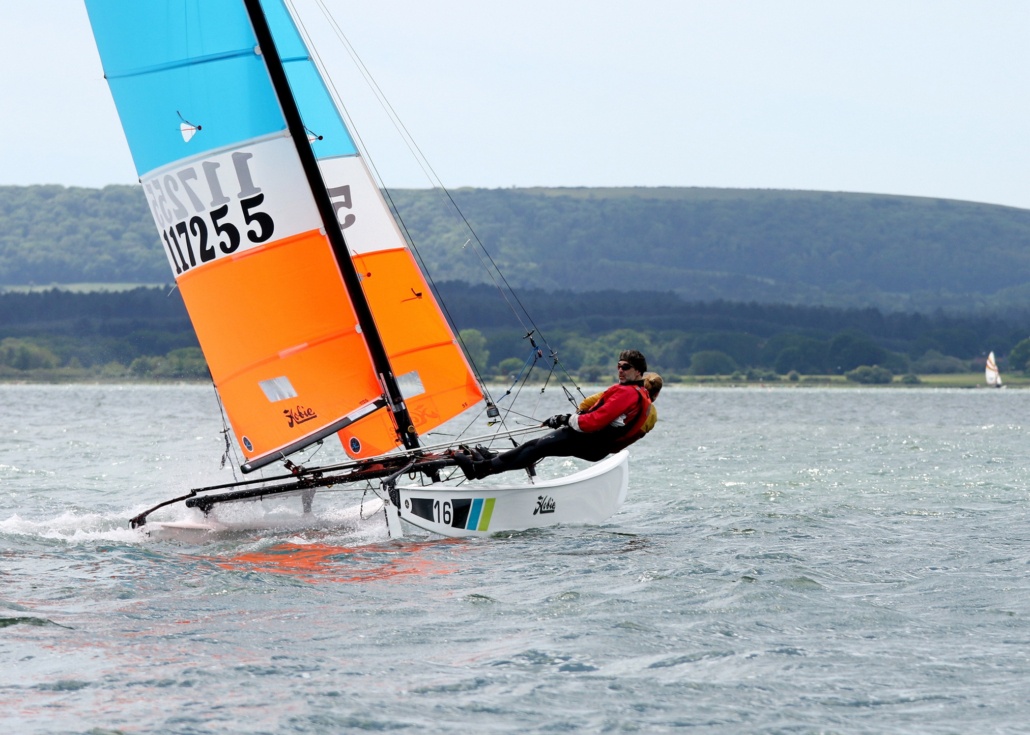 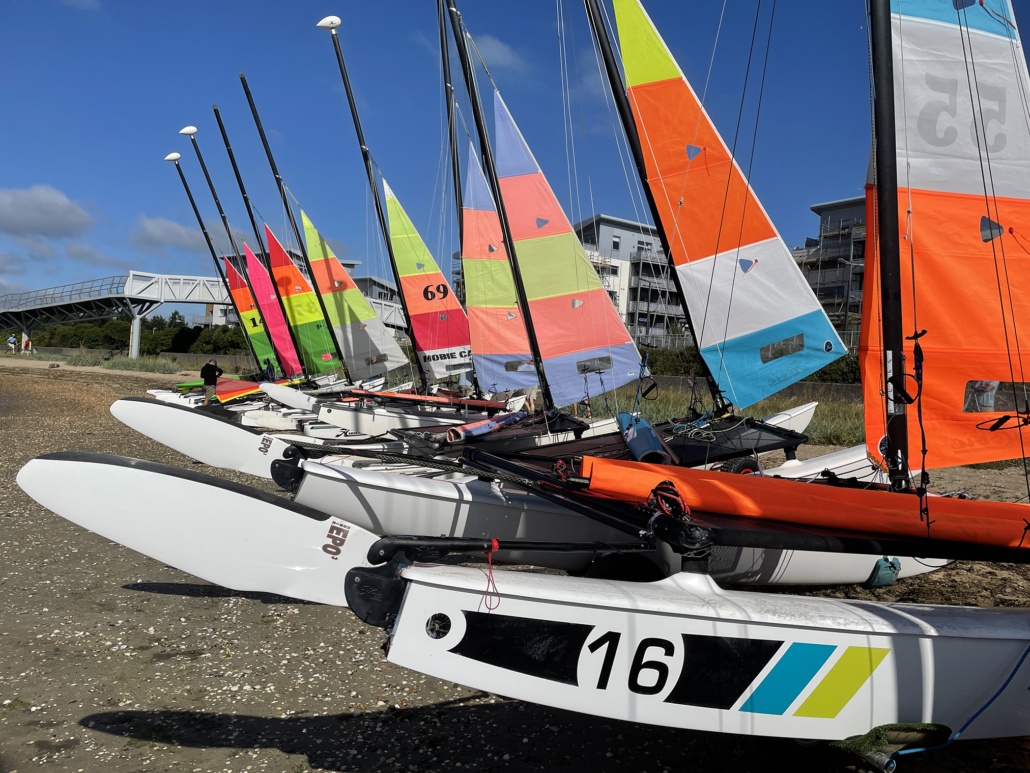 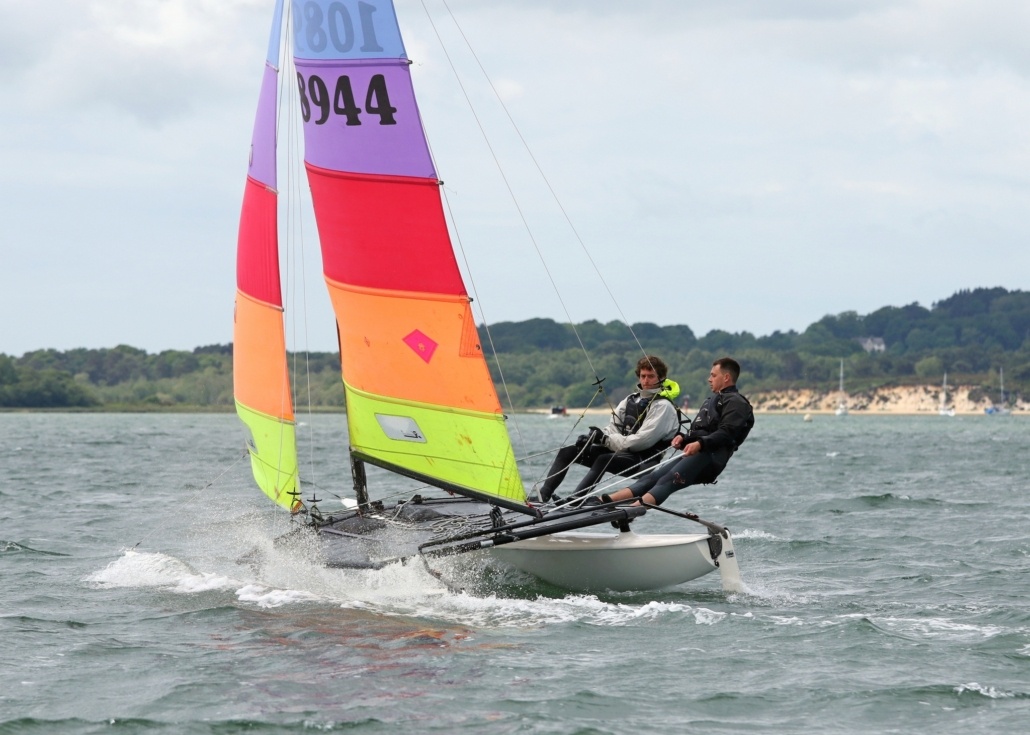 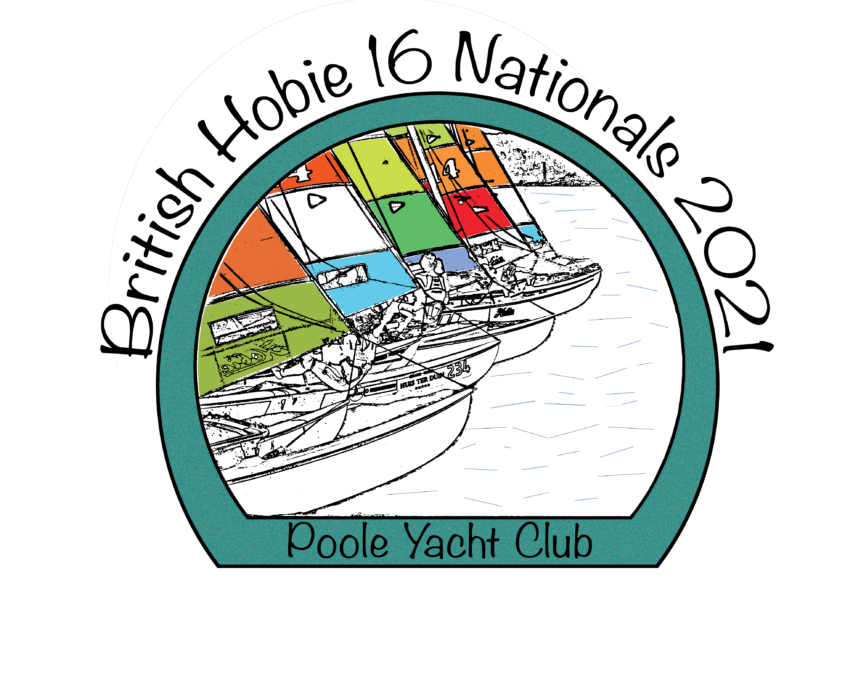 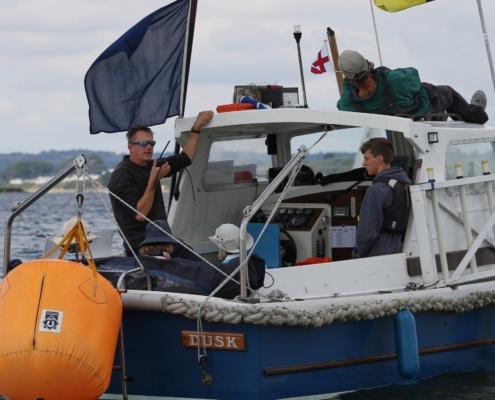 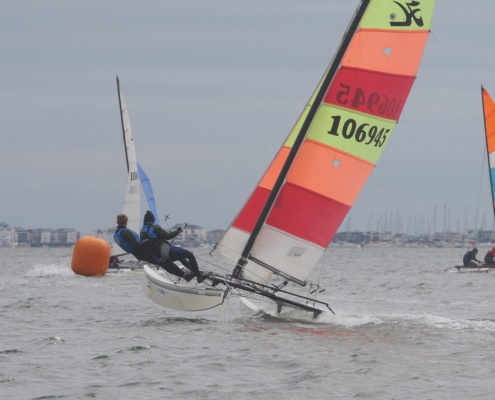 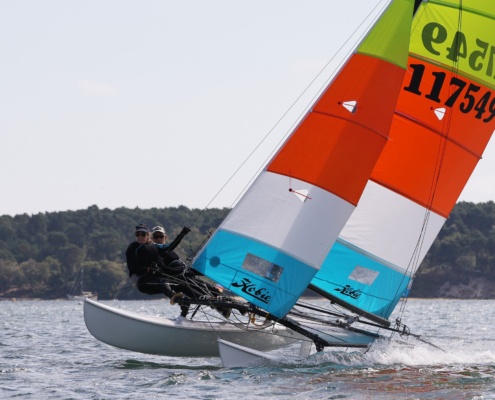 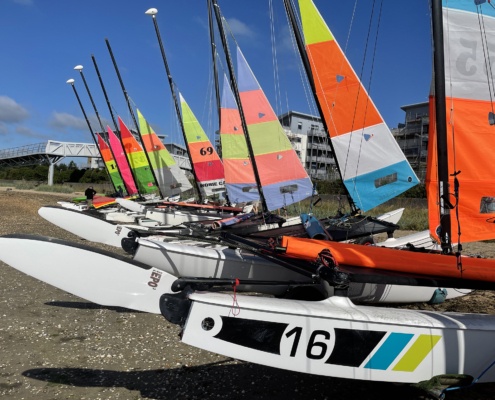 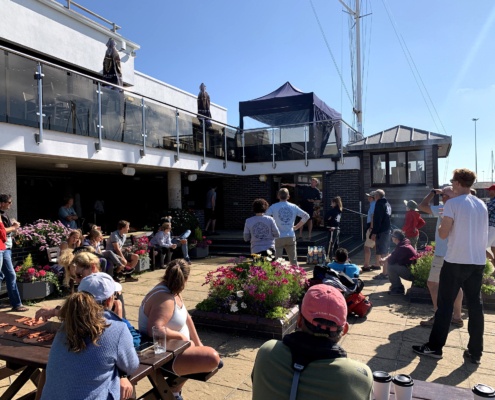 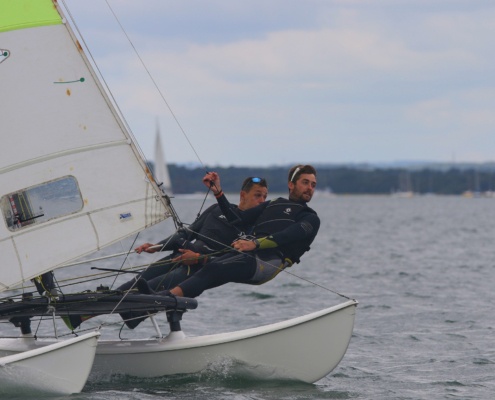 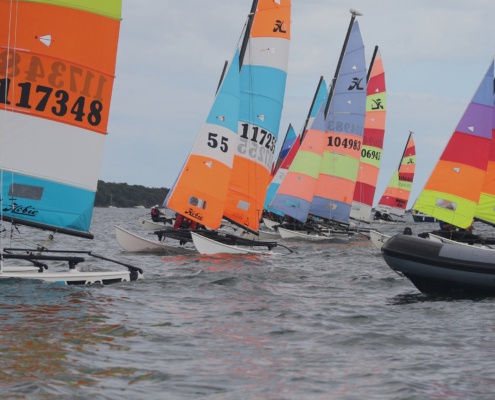 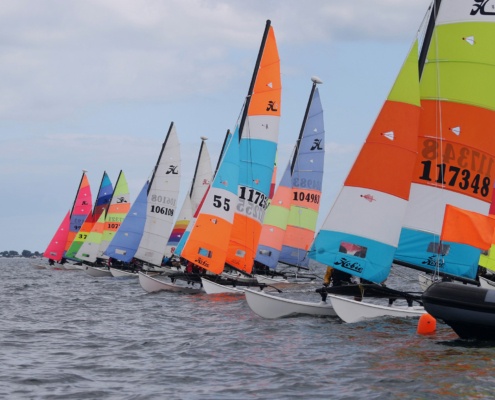 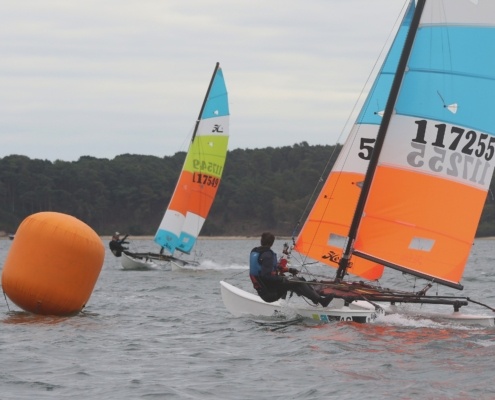 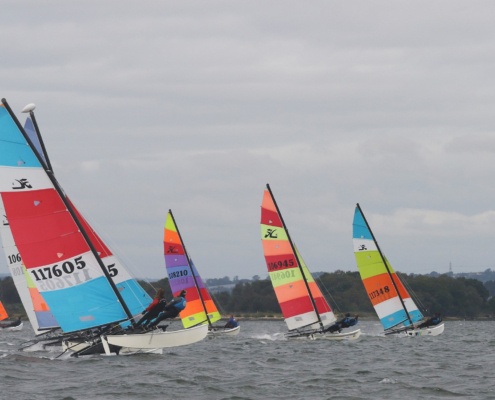 The Hobie 16 class has been making a comeback in 2021. Back in 2019 they had their first Nationals in a while and the perfect weekend reminded everyone what a fun and challenging class the Hobie 16 is. Many of the regular Hobie 16 racers who loved the class years ago returned to the 2019 event and it was great to see them come back again in 2021, this time accompanied by a keen set of younger sailors many of them family members who have been introduced to their sport by their parents. It was great to see such a mixture of boats with some from as far back as the 1980s and went to prove that a well sailed Hobie 16 can be competitive no matter its age. Looking to 2022 the British Hobie Cat Class Association are looking to set up a series of events to be released soon on the class website with and another Nationals at Poole Yacht Club which has proved very popular with the Hobie sailors and already has a Hobie 16 fleet on site. For more see the website: https://hobiecatcentre.co.uk/hobie-class-racing/

The North Easterly wind blowing across a South coast venue meant there would be challenging, and unpredictable wind shifts with wind speeds varying from 8-20 knots over the three-day event.

Twenty-three Hobie 16s with their bright, multi-coloured sails gathered on the beach looking great in the sunny spells as they prepared to set out for the start line which was laid towards the South side of Poole harbour in an area known as the “top triangle”.

The PYC race officer got the fleet away on time with the first race setting the tone for the coming days – a close finish in 1st for Spain’s 2 x National champion Jacobo Miquel sailing for the first time with Johnny Farrow, 2nd Mark Farrow and Freya Farrow (Johnny’s dad and sister) followed by Lloyd Crisp and Claire Marion. By race 3 Simon Keen and Aaron Agnew had found their groove and with some local knowledge finished day one with a win.

The second day of racing was expected to be more about trying to keep the Hobies moving in the forecast light and shifty wind but after a “drift” out to the starting area, surprisingly the wind filled in from the NNE ten minutes before the scheduled start time and the cats accelerated off the line and split formation trying to work out which side of the course the oscillating wind would favour. PYC’s Simon Keen and Aaron Agnew progressed from 3rd to 2nd to 1st consecutively in the three races no doubt taking advantage of their local knowledge of the tidal movement and working out the shifts. Alex Reilly and Rosie Frost from Weston SC started to find some boat speed and finished 1st in the second race of the day but Mark and Freya Farrow had won the 1st race and Lloyd Crisp and Claire Marion and Jacobo Miquel and Johnny Farrow maintained consistent top 5 finishes to keep them in the mix for a top place.

The forecast for the final and deciding day was for the strongest wind so far but remaining generally from the NE. The wind arrived as predicted and the Hobie 16s revelled in the gusts of up to 20 knots, the fleet driving upwind with both helm and crew out on the twin trapeze working hard as the variable windspeed required constant adjustment of the cat’s settings.

The stronger winds created a different pattern to the results with Lloyd Crisp and Claire Marion finding some incredible upwind boat speed to post a 2nd and two 1st places over the 3 races, Mark and Freya Farrow consistently finishing in the top 3 and Simon Keen and Aaron Agnew having some frustrating bad luck with a snapped trapeze harness hook just before the 1st race of the day putting an end to their challenge for the top spot.

Lloyd and Claire finished the day with a 1st place, and this is how they stood overall after a consistent performance throughout with Mark and Freya close behind for 2nd.

The 3rd place went to Simon and Aaron but by a very fine margin with 4th placed Jacobo and Johnny on the same points only losing out on countback.

All the sailors taking part and the crew from PYC made this a great event with a welcoming family atmosphere. There was an amazing Hobie party with local band Quinns’s Quinney and singing from PYC club members Clara and Olivia on Saturday evening in Poole Yacht Club’s excellent clubhouse, bar, and restaurant to complete a very successful Hobie 16 Nationals. 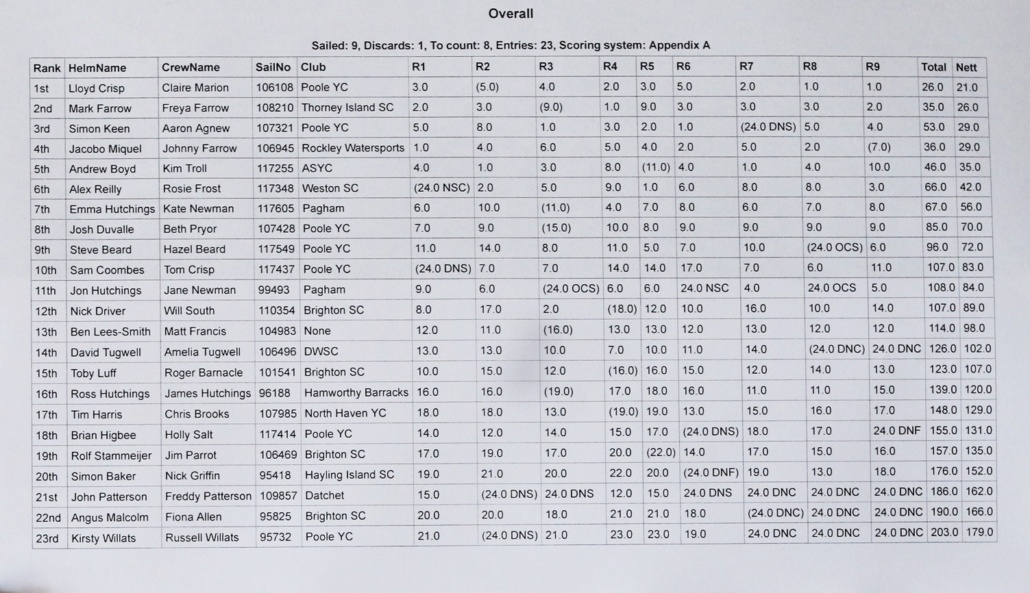 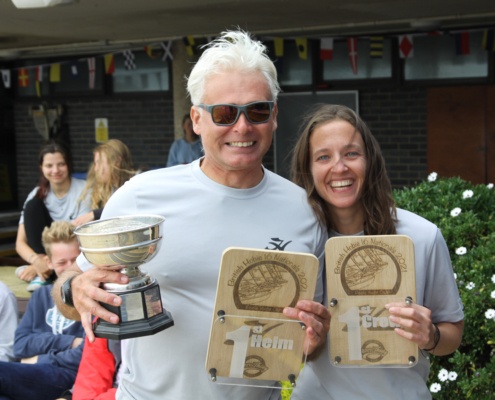 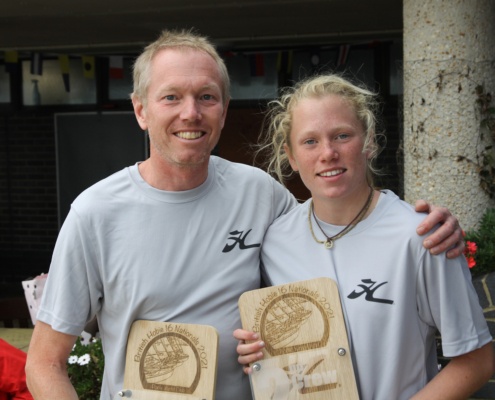 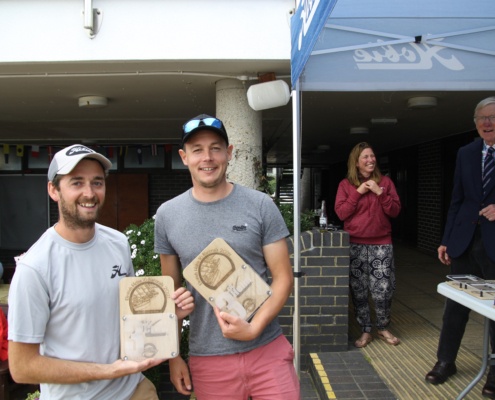 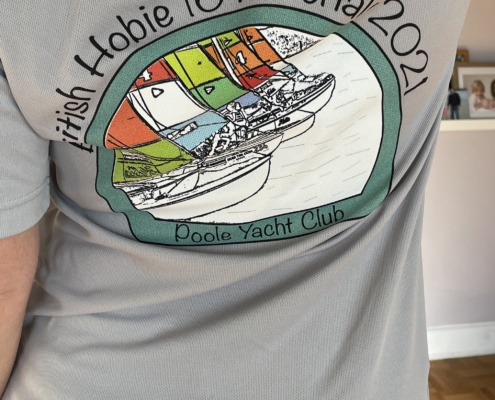 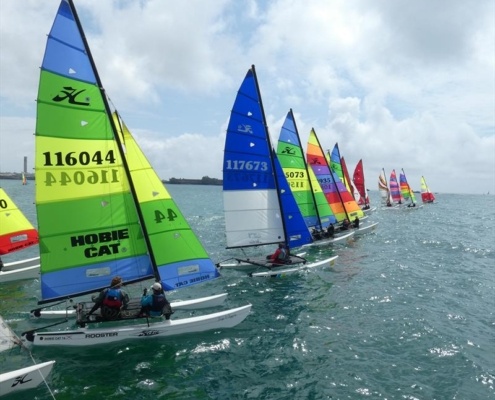 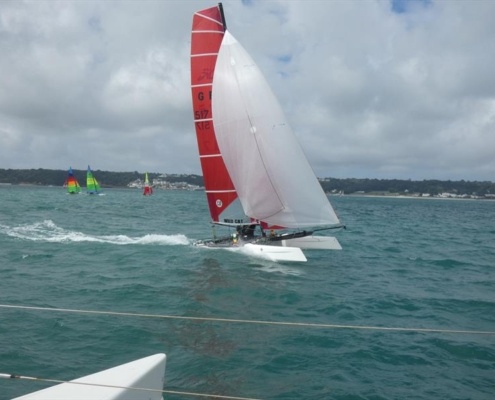 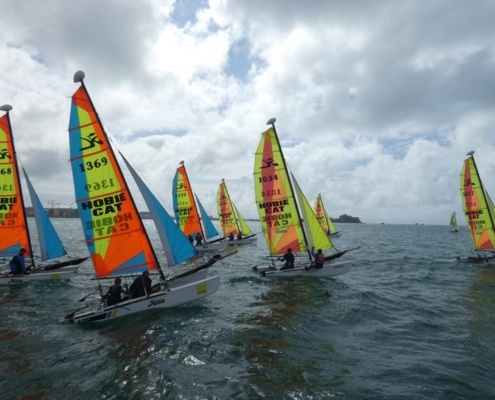 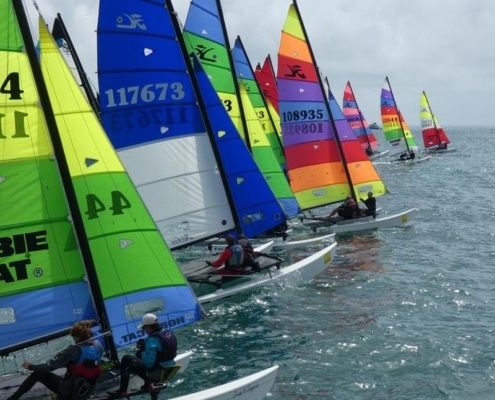 Virtually perfect wind and sea conditions gave the record turnout of 35 teams excellent and competitive racing over the weekend in the Channel Islands Hobie Cat Championships on the event’s 30th Anniversary year.

The Championships were sponsored for a fourth year running by Savills Estate Agents and hosted by the Royal Channel Islands Yacht Club. Fair weather and a constant force four westerly wind provided a buzz of anticipation as the crews rigged their boats at the Gunsite beach before putting to the water for the first of three back to back races on the Saturday morning.

In this the largest open class with 20 teams participating, the racing was close and highly competitive, after the first day it was the reigning Hobie 16 British Champion Andrew Boyd and crew Kim Troll who were quickest around the course, winning the three races, laying second were local crews Gordon Burgis and crew Kenny Snell with sisters Elsa and Chloe Swetenham in third place, the latter teams were both on equal points. Grant Neale and Karen Larose were also in contention in fourth after the first days racing.

Sunday’s racing was just as full on, Aaron Le Cornu and Rachael Smith won the first race and then a good second, but a twelfth in race three and an unfortunate rigging failure the day before put them out of contention. Burgis and Snell led the charge posting a fourth and two firsts for the last two races which gave the veteran local team the overall win and their thirteenth class title.

The class was dominated by Youth team, sisters Phoebe and Georgia le Marquand, this was their first multihull racing, their vast experience in dinghy racing no doubt helped them on the race course and starts to win the title. Mark Mound and Russell Boschat raced consistently well to place second with Miguel Arraya and Chloe Mattock just one point behind in third. Pete Culnane and Clive Russell came fourth, Giselle Barrowcliffe crewed by husband Charlie were a commendable fifth in their first Hobie Cat racing.

Adrian Jesson and Paul Martin performed well and were laying third after the first day but not being able to race on Sunday dropped them back to fourth position. Jimmy Fullerton and Perry Stone sailed into fifth place.